In Greek mythology, Sisyphus tricked the gods and closed the portal to the Hades by captivating the god of death, Thanatos. After his liberation and other sacrilegious acts, Hermes finally sentenced him to roll up a boulder onto a mountain. Shortly before he reaches the summit, however, the boulder rolls back down into the valley again and again – and this for all times. Today one also speaks of Sisyphus work, if one has to carry out a heavy work without foreseeable end. It was Albert Camus, who gave the story a hopeful perspective – “La lutte elle-même vers les sommets suffit à remplir un cœur d’homme. Il faut imaginer Sisyphe heureux.“1 We are happy because the task fills us. The boulder of Sisyphus is nowadays visible in many small and large disruptions – every new version of a software destroys the rehearsed routine; the cultural techniques, such as reading, writing and arithmetic, are taken over by the always available smartphone; the Internet dissolves the business models of the fourth estate. Thus, the metaphor takes on an additional meaning with the disruptive rolling down of the rock. 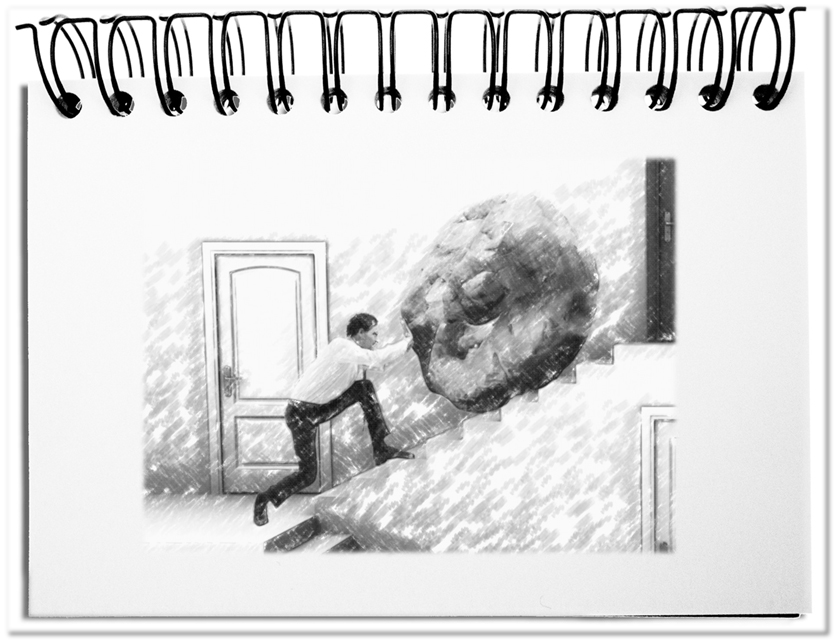 In the past, this issue was named after the late Latin word for rolling back and turning back – revolution. The word disruption shifts attention to what ultimately leads to the profound transformation, the destructive change. Those affected find it difficult of let go the old and get used to the new, because they eventually find their work around for their routine after the last interruption.

Bottom line: What would Sisyphus do, if the rock would remain stable on the top? Wouldn’t that be worse? He has the strength to make the necessary effort. We know that he can provide the required service. And obviously he also bears the frustration just before the summit when the rock breaks away from him and rolls down again – forever.
The most important trigger for disruptions is technical progress, which is already so fast that not all of its new features become implemented. Since development time is not accelerating quite as fast, we can consider that the next disruptions are already in preparation. At best we prepare for this and we see the advantages instead of complaining about the efforts. Thus the myth of Sisyphus becomes the ideal metaphor for disruptions.

1) Albert Camus, The myth of Sisyphus
“The battle to the summits itself is enough to fill the human heart. We have to imagine Sisyphus happy.”