Changes always take place in a complex environment with various aspects. For controlling purpose boundaries of the areas to be changed are determined, e.g. where or when. The measures then take place within the described boundaries. In addition, the relevant components are selected and their interactions are specified. What products, programs, influences? Finally, change tools are defined. How to transfer from the initial state to the target state? 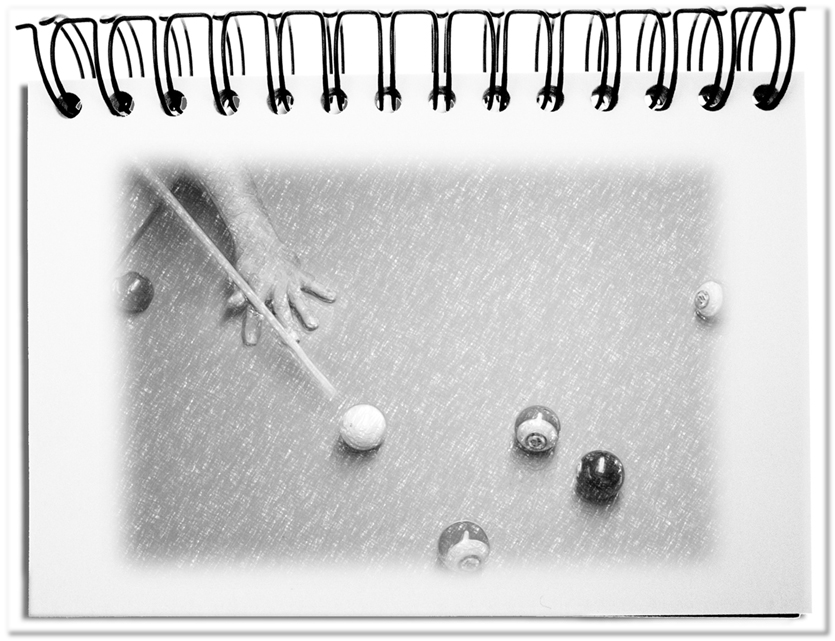 Billiard has similar aspects: the cushion defines the boundary; the balls the elements; the cue, the tip and the hands are the tools. The course of the billiard game is similar to business change. Therefore billiard is the ideal metaphor for change management.

In both cases change follows the same sequence.

With all precision you are not able to take into account all aspects. Since the smallest influences can change the result (see butterfly effect) it also always needs a portion of luck. In billiard the balls behave sometimes unexpectedly, since the fine differences are difficult to control and you are not able to influence after the thrust. In the development of the company, it is possible to readjust at an early stage during an ongoing action, if it is foreseeable that the effects go into the wrong direction. In any case, favorable conditions help.

Bottom line: Change management consists of a series of activities, which should eventually reach the desired end state. For example in billiard it is the sinking of all own balls as well as the black eight. There are always new positioning’s that require an adjustment of the plan. It is similar in the business transformation. Above all, it is important to implement the desired change. On the way to this, the measures always generate intermediate results, which require further steps. It is done when the new conditions are implemented. On the way, the activities of the billiard and the introduction of changes are similar. 1) determine the final state; 2) realize the initial situation; 3) elaborate the direction; 4) use effective tools; 5) actions; 6) keep on going. In the end, the desired result is reached. With its complexity billiard is the ideal metaphor for the management of change.

The consistent self-image is the sum of the opportunities that are altogether at one’s disposal. This is particularly valid for individuals. Nevertheless, there is also a self-image of groups of any size. Accordingly cultural areas, nations, enterprises and specialists have additionally an understanding of their group. Employees have to co-operate nowadays more and more in temporary work forms, in teams, Joint ventures and the like. It requires that one has to integrate again and to find out the commonalities. Everything starts with the question: Who am I?

The model of the Logical levels by Robert Dilts for describing the self-image is a practical approach. The following questions are derived from it and should be answered by individuals, but also by groups.

The more harmonious the aspects of the self-image are, the more a role can be performed and the more authentically one is perceived by others.

Where do I want to go?