Consistent networks and various channels not only offer a platform for publishing to classical media providers, but also for all those, who feel inspired. The only requirement is access to the Internet. For this reason, we have a huge flood of information – no matter from where, by whom, when, and whether right or wrong. This creates new potential use, operating models and interests to inform target groups. And everyone is looking for their position in the publication triangle. 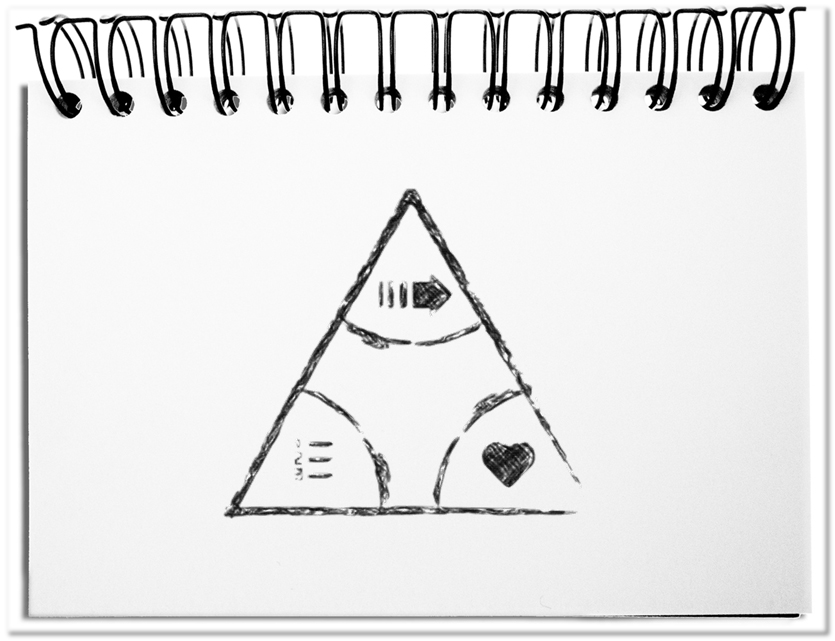 The ideal place is in the middle of the triangle – simultaneously objective, emotional and efficacious. In Germany, the balanced positions claim the public media. Let’s take a closer look at the triangle.

Bottom line: Today we should no longer speak of an information flood, but of a consistently higher level of information to which we are exposed. And all this content can be located in the publication triangle. We recognize consciously or subconsciously objective content, the emotional hue and the intended effect. Because of the accessibility of almost all people, we must be aware that we have not developed a natural mechanism to protect us from the manipulative effect of the media. For this reason, we should focus more on the publication triangle in the fact check – What does the message mean to me? Why does it appeal to me? Who benefits from it? It remains to be seen, whether we will find in the foreseeable future a way out of the tension to be informed vs. influenced.

Over time we developed the conviction ‘Seeing is believing’. This means that one believes in the existence or truth of something, which one saw with the own eyes. Some are already convinced, when they learn about the seeing through second-hand. Images are an effective way to convey a message. There are rock paintings that already used the figurative representation thirty thousand years ago. As time went by the representations became more and more realistic. Today, we can participate in current developments even through moving pictures with original soundtrack and in real time. The picture is taken as proof. Many forget that the two-dimensional medium of a picture distorts reality with its perspective, frame and the moment of the taking. The consequence is that a picture says more than thousand words – sometimes even wrong ones.

In the course of the Ukraine crisis the above photographs were taken in a meeting between Chancellor Angela Merkel and President Barack Obama. Different photographs of the meeting appeared subsequently in several newspapers. We still trust the journalists as the last bastion of objectivity. The ethos of journalists, to always spread objective truths, should actually lead to reliable news. Let’s forget the special cases of the controlled, non-military war correspondents (so called embedded journalists) and the quasi-state-run press, since they are obviously propaganda. The associated attempt of the historical manipulation already began with Caesar, continued with Charlemagne and the dictatorships of the twentieth century, until today.

Let’s focus on respectable journalism that spreads news to the best knowledge and belief. In order to define a limit, there are some non-binding rules.

For these reasons a picture is always one-sided and unbalanced.

If we now look at the scribbles, we see four pictures of the same meeting, which were taken within a few minutes. Each picture creates another impression. What are the reasons to select a picture for publication? By looking at the procedure, from taking a picture to publishing, we encounter many filters.

Eventually the observer decides on its impression. Now look at the sketches above and consider, which picture you would buy!

About the mentioned meeting, on February 9th 2015, different pictures were used in different publications. What impression do the individual pictures create? On the left above? On the bottom left? On the top right? On the bottom right? And what was the real atmosphere of the meeting? Who might know.
In any case, people decided with the selection of the image which impression should generated among the viewers. A picture is worth a thousand words that do not necessarily correspond to the truth.

Bottom line: The times of ‘seeing is believing’ are probably over. Each event has any number of pictures that do not clearly express the real happening. Even blurred mobile phone photographs are used today, in order to convey a message to the public that cannot be guaranteed by the two rules. There is no other choice than dealing critically with these ‘proofs’ and to always consider the possibility that the message is wrong – whether we are deliberately manipulated or not.

P.S.: Do you remember the posed politician photo of the Charlie Hebdo demonstration?