The ways to send an idea on its journey are limited to the means of our perception. Usually, we transport the messages through our senses: seeing, hearing, touching, tasting, smelling, etc. But in order to consolidate into meaning, words can not be avoided. The explanation of a term needs words that in turn need words that … – etc. Thus, a term gradually gets filled with explanations that never clarify everything in the same way to everybody. Messages become cases that can be arbitrarily filled with information. In the same way, a glass can be filled with any arbitrary content. This makes the glass the ideal metaphor for a message. 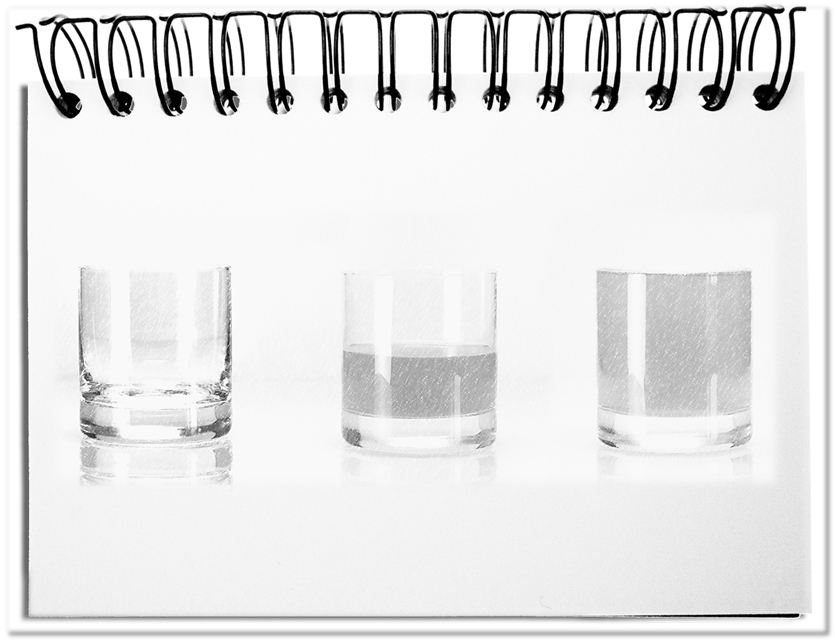 Above all, new ideas struggle with the fact that they literally lack the linguistic expressions. As a rule, there are three ways to fill a message with target group-oriented content.

The empty glass (The insufficient content)
A statement consists of a limited number of words. This prevents that all words are explained in one sentence. Take a simple sentence like the following.

Free radicals arise as a result of certain processes.

The context could provide an indication that they are not anarchists, who were previously imprisoned and oppose any authority, with influence and reputation, determined by their credibility that affects other people, thereby manipulating, but acquitted in trials. In which a judge might have been presided, who referred to a paragraph ….
The example corresponds to an empty glass that lacks content as long as the context of the aging of organisms is not presented. The interpretation of the sentence is of course determined by the knowledge of the target group. Depending on the area of ​​expertise, lawyers interpret the sentence differently than biologists.
Notable special cases of the empty glass are societies that exchange information with very few words and are convinced that everybody understands the same. An example of this kind of high context culture is Japan. The Ishin-denshin (以 心 伝 心) suggests a similar understanding to the involved people.

The brimming glass (The excessive content)
Some statements are described in such detail that one loses the overview in the process and in the end the actual message.

A certain form of electromagnetic radiation, which specific components are applied as signals on a thin layer to a highly flammable mixture of cellulose nitrate with camphor or on an amorphous substance produced by melting or influences a technical component with certain physical properties, in order to store a copy of the reality on a long-term basis.

This detailed description is a remarkable achievement that gives you an idea of how much the author is trying to explain all aspects of photography. However, this form of description corresponds to the brimming glass that can quickly overflow – which corresponds to the displeasure of the target group. Right?
This analytical approach of conveying a message is more likely in Western countries, in so-called low context cultures. Interestingly, this approach does not create the same understanding among the observers, but quickly leads to confusion.

The half … glass (The content in plain language)
Just as every glass has a normal degree of filling, depending on its content, so too should be conveyed a message with a reasonable degree of filling. It makes no difference whether we speak of half full or half empty glass.

The following 3 examples show why a glass is the perfect picture for a word.

A word is used to carry a specific content. Although ultimately the recipients decide what they understand, the senders have control over their word choice and the structure of their sentences. Using a simple language increases the likelihood of being better understood. The word choice is determined by the target group.
Within the framework of easy language, certain rules increase the understandability of messages – e.g. short sentences, one expression per sentence, a simple sentence structure, the avoidance of abstract concepts and allusions, as well as foreign words and abbreviations that are explained at the first appearance. The likelihood to be understood goes up.

Bottom line: The glass is a container into which content can be filled. Also messages have a content – the meaning. The use of a certain word is still no guarantee that the right content is present and understood. That’s why you develop a message with more or less explanations. The empty glass symbolizes words and sentences, which are not explained extensively. The full glass is a symbol of the opposite extreme that dilutes the message through too many explanations. The half-full glass symbolizes words that are interpreted depending on the setting. Often, existing phrases are simply filled with new content – just as the meaning of witty in German has changed from knowing, to ingenious, to funny, to strange nowadays. Thus, the message becomes the container in which arbitrary interpretations are filled. The same is valid for a glass. It makes the glass the ideal metaphor for a message.